Thanksgiving: Thanks for Fucking Nothing 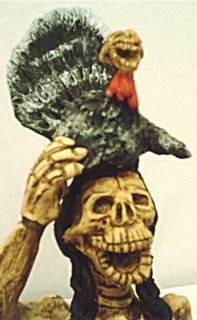 it's thanksgiving? and i've got, like, a whole lot to be thankful for? RI-I-I-IGHT! like how can i be thankful for anything when nothing good ever fucking happens? i mean, like, i'm always trying to be, like, helpful? and, like, doing what's right? and look what i fucking get in exchange! i get to live in a fucking stinkhole racist society, where, like, the game is rigged for rich people? yeah, i read the fucking new york times! and i see how, like, rich people get rich because they, like, fucking steal? from the poor? they fucking get rich be taking shit from people who have nothing! tell me that's fair!

so anyway, professor kurgman was telling me that this shit has to, like, stop? and that rich people, like, EXPLOIT poor people? and like, this whole fucking country was founded on genocide? and that, like, there's gonna be a fucking revolution someday? and the poor people are gonna take what's theirs? and that everyone is gonna contribute, like, whatever they can do? and, like, everyone is, like, gonna take only what they need? and, like, everything will then be fair? because everyone will be the same? yeah, i do well on professor kurgmans tests! u know y? because he gives the same grade to, like, FUCKING EVERYONE! cause that's, like, fairness?

but that is like, totally future? now, we gotta fight! fight the man! yeah, fuck you, i'll take the message to the street and kick your fucking ass too! i don't care if i, like, miss my classes to fight for the people? i'm getting the same grade anyway! i'm getting my fucking phd anyway!

yeah, i'm gonna, like soooooooo fucking fight this thanksgivng? i'm gonna spend the day with my fucking parents and teach them, like, about my rights? like, last thanksgiving, i taught them about abortion? i, like, got pregnant? just so i could have an abortion? my mom said i ought to go fuck myself, but i said, like, shut your fat fucking ass up? u wanna see me have a fucking abortion right on the fucking dinner table, bitch? i'll fucking do it too! like, u ought to go fucking talk, with your murdered turkey? fuck my parents! i plastered their whole fucking house with peta stickers? that i paid for with money i stole? from my father's wallet? fuck him! he stole that money from the working people, so i'm taking it back! he's such a capitalist fuckface, like he goes to work to make up for his small white dick or something?

this year, i'm gonna, like, put explosives in the turkey? the turkey fights back! it will be like a fucking turkey intifada! i'm gonna name the turkey rachel corrie because the turkey and rachel corrie were both killed by zionists? and i'm there to help both of them fight back after they're fucking dead! And, like, maybe rachel corrie will blow up and kill me too? That would be, like, so cool? because I wish I was dead anyway? and, like, they can then put my pieces on display at, like, an art gallery or some shit like that because it would be, like, art? with a message? and peta can throw the rachel corrie pieces at the fucking white men who walk in front of kfc?

yeah, that's what thanksgiving is all about! it's about, like, all the oppressed people in the world and the turkeys being thankful for ME!

yeah, thank me and fuck you.

A couple things Kathy. You said you were going to throw pieces of turkey at the white men walking into KFC, apparently you've actually never been to a KFC because the customers tend to be a uhh...a little more colorful, and don't worry about all your other problems there aren't anything a good bangin would cure.

Good luck with that "turkey intifada." Is the turkey going to shout "Allah Akbar" before it explodes?

Please pass my regards to mum, dad and the Turkey.

I remember one of the first porns I ever saw in the middle 70's. A waiter was getting a hard time from now that I think about a Jewish lady customer. She was rude and condesceding like most Jews are. She ordered a turkey sandwich. So the waiter goes into a room next to the kitchen and takes a cooked turkey with him. He ends up fucking the cooked turkey and then jerks off on it. He then carved the part he jerked off on and served in to the rude Jewish customer.