KFC, PETA and ME!

so today i was, like, handing out leaflets in front of kfc? because killing chickens is, like, so fucking cruel? you know, like, if people stopped eating chickens, chickens would never have to die anymore? we would have so many fucking chickens everywhere! so, anyway, maybe then, the chickens would, like, fight back? and they would, like, attack the corporatists and, like, peck them to death? peck their fucking eyes out? yeah, you eat at kfc, you're gonna get your fucking eyes pecked out! and then, like, the chickens would eat your brains through your eyeball sockets? ha ha getting your brains pecked while your still alive! u think its funny when u eat a chicken, wait 'til ur eyeballs are wrenched out by their fucking beaks ha ha! 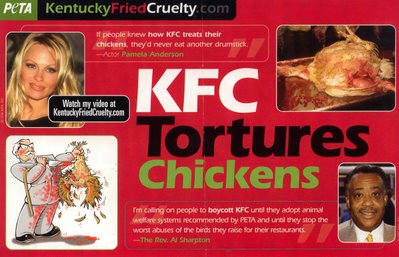 who's the cunt in the flyer anyway? like, fuck her? but al sharpton is like so fucking cool. i mean, he's black, ok? so he gonna be cool! fuck dat shit! like, my boyfriend told me that al sharpton, like, once led a riot against a buncha fucking jews in brooklyn? cool! and al sharpton, like, instigated, this dude to burn down a fucking clothing shop in harlem, that, liked, killed a buncha people? cool! and like even i know about how al sharpton exposed, like, some racist district...uh...attorney for raping some chick named, like, tawana, or some shit like that? i mean, al sharpton really really really hates white people and jews, so he's. like, fucking PERFECT for being on our side and resisting the jews at kfc from killing poor poor chickens?

so anyway, i handed the flyer to this asshole on the street, and i'm like all, "hey dude, like boycott kfc?" and he asks if peta is gonna protest in front of muslim halal restaurants that kill chickens and goats and sheep and whatever. so i said to him, like, are you a fucking racist or what? yeah, then i screamed GET YOUR FUCKING HANDS OFFA MY TITS and i kneed him in the balls! cool! i then, like, spit on him? fucking racist! jew racist! like, no wonder everyone hates you guys?

and i'm like, really fucking angry now? yeah, maybe i should get, like, a fucking JOB at kfc? when someone orders a chicken, i'll smack him (yeah, like wymyn would, like, EVER eat a chicken?) with a dead fucking bird and, like, get chicken blood all over him? i'd, like, get to work early, and, like, leave rotting chickens on the tables? maybe i oughta, like, send a bloody chicken to fucking bush? the whole fucking army, like, eats chickens? fuck them! no wonder the muslim people hate us! we, like, kill chickens all the time, and, like, we WONDER why fucking amerikkkans get their throats cut open by muslims? yeah, you cut the throat of a chicken, and we'll cut your amerikkkan ass open too!

The last "explicit video" of Pamela that I watched was a lot more fun.

Jews like me really love our chicken.
Actually my favorite dish in the whole world is chicken parmigiana. I'm not sure I spelled that right, but I aint got no Phd.

it's, like, so beneath me to talk to a non-phd!

So, that was you, Kathy?

I have a cleaning bill for you. Not to mention, I'm still nauseous from that "knee job".

It is great that we can have such dialogue.

Maybe there is a chance for world peace afterall.

Is afterall one word or two? I don't have a Phd so I don't know.

As reported by MM at http://michellemalkin.com/archives/006072.htm

WOW! I just stumbled upon this site and am in awe of your knowledge of the English. Your vocabulary speaks volumes of your white trash upbringing in the trailer park. I live to actually meet someone like you that walks upright! Just amazing...LMAO!

I have room for all of Gods little animals ...right next to my mashed potatoes! LMAO!

This blog is such a riot!